1 Garda Siochana – Flooding. I would be most unusual for flooding to be able to cherry pick files and only destroy some of them.

2 DPP – File stolen by The General. The file was later recovered by the Gardai after doing a deal with Martin Cahill to release one of his associates from prison. File was given back to DPP but there is no longer any trace of it.

THE DPP ALSO INSTRUCTED THE GARDAI NOT TO INCLUDE NIALL’S SOLICITORS STATEMENT IN THE BOOK OF EVIDENCE.

3 State Pathologist’s Office – No documents exist anymore. Reason given was that the might have been lost when they moved premises

4 Coroner’s Office  – There was a break in. The burgler selected a small number of files and set fire to them on a desk top. Fr Niall’s was one of the files.

In the opening pages of the Book of Evidence a key witness who was present in Kilcoursey house is dismissed as not important because he was not in the house at a certain time that evening.

This comment made by a senior Garda Completely contradicts the witness’s own signed statement which is included later on in the report.

No one has picked up on this despite it having been examined again by Gardai, the DPP’s office, Dept.of Justice experts and Journalists who have reviewed the case.

Files were stolen From DPP’s Office

Set fire to in Coroner’s Office

I will be going into detail on all of the above over the coming days.

Director of Public Prosecutions Claire Loftus said the directive will give victims the right to receive reasons in a range of offences – including rape, child sexual abuse and harassment.

The ruling must be transposed into Irish Law by November 2015.

Currently, the DPP’s office only gives reasons for not prosecuting in cases involving fatalities.

The directive will also provide victims of serious crime the right to a review of a decision not to prosecute.

Speaking at a conference in Dublin, she also urged counselling organisations to co-operate with her office in the disclosure of information in relation to criminal prosecutions.

She said some organisations take the view that even where victims have given consent, those who provided counselling can decide what material should not be handed over.

Ms Loftus said all that material is eventually handed over but often at the last minute when trials are about to commence which is very unsatisfactory.

She said that the HSE, Dublin Rape Crisis Centre, One in Four and Cork Sexual Violence Centre have all signed Memorandums of Agreement with the DPP’s office which provide for disclosure of information.

Ms Loftus said these agreements reduce delays and consequent trauma to victims caused by late adjournments because cases are not ready.

She added that the new Court of Appeal – which she understands will have a permanent criminal division – will undoubtedly relieve the situation in appeals against conviction or sentence and prosecution applications for reviews of sentences. 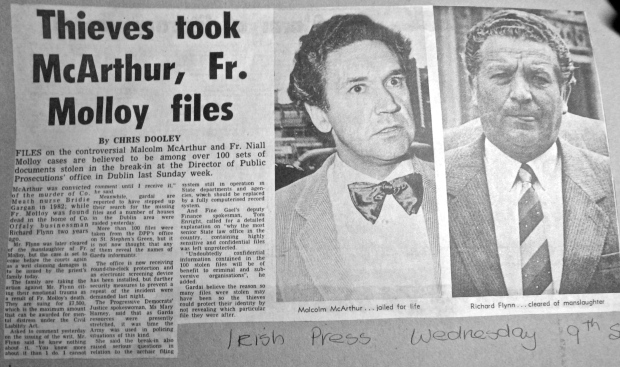 “The file was stamped “top secret” but it’s content related to one of the most explosive criminal investigations and trials this century. The file was so important that garda authorities were willing to trade it for a convict’s release from high security prison.

Within the folder were two documents, letters from a Circuit court judge to the office of the Director of Public Prosecutions. They gave the judge’s thinking on a death that has mystified Ireland for nine years.

Fr. Niall Molloy died in a violent argument in the bedroom of Theresa and Richard Flynn in Co. Offaly in 1985. The following year with official investigations apparently concluded, Richard Flynn stood in a circuit court dock charged with manslaughter and assault.

He was acquitted after justice frank Roe accepted expert evidence that the priest may have not have died from his injuries but from a heart attack. An inquest jury found the priest died from head injuries sustained in the fight,  a difference of opinion that led to nine years of speculation, some of it aired publicly in the Dáil.

This week it is Judge Roe’s letters to the DPP that bring new questions to a mystifying case. The Sunday Independent has also learned that Fr. Molloy’s last will and testament, believed missing for nine years, is said to have been sent  to his Diocesan headquarters, and may have made provisions for Mrs. Flynn.

Judge Roe’s letters are remarkable, both for their contents  and for the method by which they were made public. the Garda file in which they were held was one of 145 stolen by the late martin Cahill, Dublin’s infamous General from Garda headquarters.

Cahill used the file about Fr. Molloy’s death to bargain with the authorities, effectively promising it’s return upon release from an English high -security prison of a close criminal associate. the man was transferred to an open prison and then finally back to Ireland.

The file was returned but not before the General had taken photocopies of it’s content for further use. He told associates he planned to make it’s contents public, but he had not decided on the nature and date of their release when he died. Cahill had, however made sure a colleague was kept fully aware of the file’s location, and of it’s content.

last week the Sunday independent was shown the two letters. One is hand written and, from other examples of his hand writing, the hand of Justice Frank Roe, can be identified.

The first hand written letter dates from before charges were made against Richard Flynn, and is a communication from Mr Roe to Eamon Barnes, the Director of Public Prosecutions. The letter says Mr Roe knew Fr. Molloy and the Flynns.

The second letter was written after the trial and is an explanation – the word ‘explain” is actually used – of judge Roe’s reason for the dismissal of the charges against Richard Flynn.

Mr. Roe  last week refused to discuss the letters. ” that case is dead and buried,” he said. ” I have nothing to say.”

He also refused to comment on why he sent the handwritten letter to the DPP, and would not elaborate on his associations with Fr Molloy and  the Flynns.

” They were lovely people all of them.” he said ” God bless them all.”

There is an article in today’s Irish Daily Mail, Page 20,

NOBODY will face charges arising from the killing of Fr Niall Molloy almost 30 years ago.

The Director of Public Prosecutions has concluded an examination of a garda file on the killing of the former parish priest of Castlecoote in Co Roscommon, and directed that no charges should be brought.

The decision was not unexpected. The garda cold-case investigation of the murder re-examined the major issues raised, as well as a number of fresh allegations, and produced no evidence of a new suspect.

The family of Fr Molloy said they would now press ahead with their demand for a commission of inquiry, to investigate all of the circumstances surrounding the priest’s death.

The 52-year-old priest was found beaten to death at the home of his friends Richard and Teresa Flynn in Clara, Co Offaly, on July 8, 1985.

Businessman Richard Flynn was charged with the manslaughter of Fr Molloy and causing actual bodily harm, but at the 1986 trial, Judge Frank Roe directed the jury to return a not-guilty verdict.

“We’re going to press ahead now for a commission of inquiry, which is what we always wanted”, Fr Molloy’s nephew, Bill Maher said.

There was a meeting with the Gardai yesterday and they informed us that the DPP has come back to them and said that based on the file submitted  by the Gardai ( Irish Police) there would be no charges.