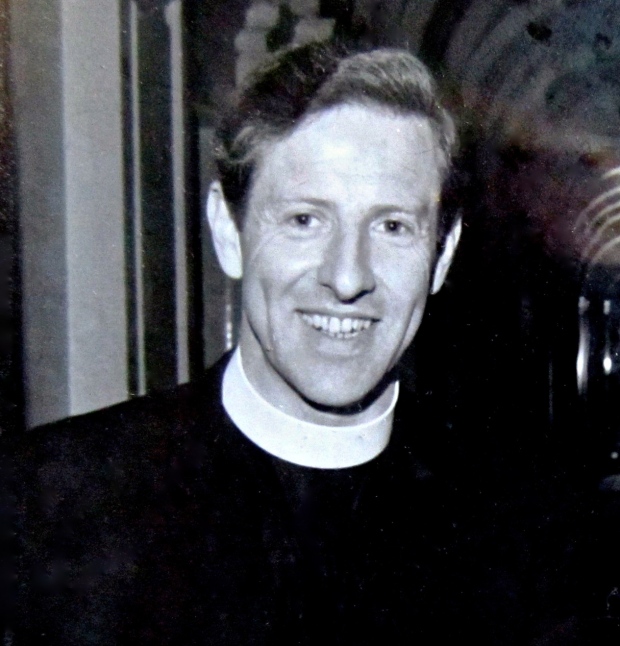 On this day in 1985 my family got a phone call to say that Niall was dead. I was initially told that it was an accident. I thought Niall, a keen horseman, must have had a fall from a horse.

In the next phone call that  I was informed that it was not an accident …there was a lot of blood at the scene. Rumours started to circulate, some of them I believe were deliberately started in order to cover up what actually happened.

The full truth of what happened that night has never been made public. 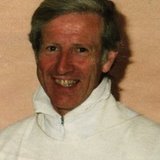 Photograph of Fr Niall at a wedding in his Parish on Saturday 6th July 1985. He was attacked and beaten within 36 hours of this photograph being taken. He was left to die for a number of hours before Gardai were called to the scene despite the fact that there were medical people present when the attack happened.

The Crime Scene ( I should say alleged Crime Scene) of the Murder of Fr Niall Molloy was tampered with after the first Garda, Sgt Kevin Ford, arrived on the scene.

In a statement he made to the Serious Crime Review Team, Sgt. Kevin Ford ( retired ) said the following.

“ I have viewed the photographs and can say this is how I found the scene with one difference. I have a recollection that of the body being in a different position”

Someone moved the position of Fr Niall’s body between the time Sgt. Ford arrived and sealed off the scene and the time the forensic team arrived from Dublin to take photographs of the body.

Below is a recent post to the petition site in Niall’s name by a person living in Clara, Co. Offaly where Niall was murdered.

name not displayed
Ireland
“I was only a child when this man was killed and its a disgrace to think that there is people in this town at the time that could cover up such a brutal death, I live in this town nearly all my life and this man’s death has put a curse on this town ever since, justice needs to be done to let this man rest in peace and to give closure and peace to his family and lift the curse of this town”
https://www.thepetitionsite.com/10/justice-for-fr-niall-molloy/
Please sign and share the Petition

“Fr. Deignan was elderly man. He arrived first and said let’s move the body” – Statement from a  family witness

“Death primarily the result of No 1 head injury” – Dr Harbison, State Pathologist. (Opinion given within 24 hours of Niall’s death) 8/July/1985

The only man ever charged over the death of Roscommon priest Fr Niall Molloy was buried in Co Westmeath on Monday.

Richard Flynn, who was in his late 80s, died at a nursing home in Ballymahon, Co Longford, following a lengthy illness.

The Galway native was buried next to his late wife Theresa in TubberclairCemetery following midday funeral Mass at the Church of the Immaculate Conception, Tubberclair, Glasson, Co Westmeath.

Fr Molloy (52) was found dead in Theresa and Richard Flynn’s home at Kilcoursey House, Clara, Co Offaly on July 8th, 1985. A friend of the Flynns, Fr Molloy had earlier attended the family home for their daughter’s wedding.

Mr Flynn was later tried for the priest’s manslaughter and assault and was acquitted on all charges after Judge Frank Roe directed the jury to find him not guilty.

Mr Flynn’s son David was tearful as he described his father as his best friend. He also spoke of his fathers sporting prowess, how he had captained both the junior and senior rugby teams while attending boarding school in Roscrea.

Mr Flynn went on to captain Connacht before an injury ended his rugby career when he was 25, he recalled.

David said his father had planned to emigrate to the United States but met and married his late wife in 1955 and stayed in Ireland.

Mr Flynn’s daughter Maureen spoke of an “amazing childhood” in Tubber where “the table was always set, the fridge was always full and Richard was always at the door wide open; a big greeting for everybody”.

She likened the farm to “going to an amusement park except it was just farming” and she recalled the wonderful childhood they had.

“Mum and Dad’s pals came for dinner constantly . . . we took it for granted all the coming and going and no matter how late at night Daddy would be at the door making sure everybody got to their car, directing them out the gate,” she told the mourners.

Maureen recalled as children not being allowed to fight. Her father would say, “Now, now little children love one another. We didn’t really know what it meant but it kind of stopped us somehow.”

After Mr Flynn’s wife died, he took it upon himself to keep the family traditions going, “the open house everything, the warmth and the love, the homeliness,” she added.

He is survived by his second wife Ann, son David and daughters Maureen, Anita and Sandra.

Aunty May Quinn ( Flynn ) was the oldest member of the Flynn family to reside in Kilcoursey House.

According to her  statement she one of the last people to see Fr. Niall alive on the night he met his violent death. She claims to have spoken to him around midnight. He was on his way to bed and had a drink in his hand . Niall suffered from Ulcers and a glass of milk was found beside his bed.

Aunty May clearly states that she was the last person to go to bed that night.

” I went into my room , closed the door and went to bed. I didn’t hear anything else that night ”

Niall was dead by 1:00 in a room along the corridor from May’s room. There was allegedly an argument and a violent struggle. Over the next few hours hysterical Theresa Flynn had to be restrained . Theresa also had to be sedated by a Doctor despite the fact that she had been drinking and had taken a sleeping tablet.

Aunty May didn’t hear anything.

Numerous people arrived in cars from 1:00a.m. and there were a lot of people upstairs to visit the scene of the killing.  A priest,  Doctor, family members and a number of Gardai were all up and down the stairs during the night and Aunty May didn’t hear anything.

THERE IS NO RECORD OF THE GARDAI SPEAKING TO AUNTY MAY OR ASKING FOR A STATEMENT FROM HER Despite the fact that she had not left the house all day except to go to Mass in the Morning.

At the inquest in 1986 May was on the witness stand . She stood by her statement and was asked by the Coroner to sign her statement. She obliged and as you can see  her signature in the Coroner’s Court in no way matches her original signature on her statement taken by the family Solicitor. ( see below ) 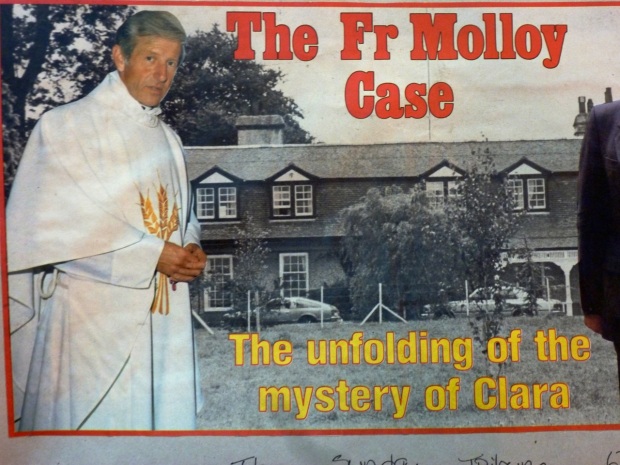 A total of 67,000 views  have been made to this website. more information is being added regularly.

Fr Niall served as a Chaplin in the Irish Army

30 years ago today, 8th July 1985, Niall was badly beaten and left to die over a number of hours. While he was dying a number of people scarpered away from the scene while others were busy trying to clean up and cover up.

THE FIGHT FOR JUSTICE WILL CONTINUE

The astute Parish Priest of Clara Fr Duignan was allegedly the first person to be called to the scene of the killing. In his statement he Says ” I noticed some blood stains on the carpet nearby ”

“Some Blood Stains” One blood stain measured over 8 feet long ??????

Official drawing by the Gardai of the scene