In the opening pages of the Book of Evidence a key witness who was present in Kilcoursey house is dismissed as not important because he was not in the house at a certain time that evening.

This comment made by a senior Garda Completely contradicts the witness’s own signed statement which is included later on in the report.

No one has picked up on this despite it having been examined again by Gardai, the DPP’s office, Dept.of Justice experts and Journalists who have reviewed the case.

January 2009 is when I first made contact with the Garda Cold Case unit. After the initial contact things seemed to be going nowhere until I mentioned that I had met with the GSOC. Things started to happen then and after a few short meeting with two Detectives they suggested that I should write to the Garda Commissioner. We are now five years on the the family have had no answers. There seems to a very cross party reluctance to bring the case to a proper conclusion.

Garda Inquiries finished in March 2013 yet it took Alan Shatted almost a year to appoint an Sc to look at the Garda report. We have heard no more and we are very unhappy with the terms of reference.

From day one we have always asked for an investigation into how the case was handled in 1985 -1988. This has not been done and has been left outside the terms of reference given to Dominic McGinn. This is not acceptable and we will not rest until Garda  behaviour  ( and others ) is examined in detail.

NO Appointment was made last December. Minister Shatter sent a letter to a member of my family stating that ” The Minister wishes to update you to the effect that his intention is appoint r Dominic McGinn SC to carry out this examination”

Press releases were sent to the media on the same day with similar wording. He clearly stated his” intention” to appoint Mr. McGinn. Not that he had actually made an appointment.

Having heard nothing more my family was getting concerned about the delay.

Dear Minister Shatter,
You have made various statements over the past months about your intention to appoint Mr. Dominic McGinn SC to review a Garda report into my late uncle Niall’s death
Could you please inform my family, as a matter of urgency if and when this appointment will be made. ?
As you are aware you are the second Minister for Justice to deal with “Inquiries” into  Fr. Niall Molloy’s death and indeed we have had two Garda Commissioners during the same period.
My first contact with the Cold Case Unit was in Jan 2009.I have also had discussions with the GSOC since 2009 which also is of great concern to me in light of revelations about them in the past two days.
How much longer has my family to wait ? How many more people are going to be appointed to make Inquiries or reviews ?

On Friday14th. Feb. I got a reply thanking me for my email of the 12th Feb ( my email was dated 11th Feb ) and informing me that

Just for the record it is five years, this month, since I first made contact with a detective from the Cold Case Unit.

It was only in Feb 2010 when I informed the Unit, by email, that I had meetings with Garda Ombudsman’s Office that things started to happen. Within Hours of sending my email I was contacted by phone by a senior member of the Cold Case unit to arrange a meeting for the following Friday.

So here we are after five years of work by the elite squad of our National Police Force.

P.S. My dealing with the Garda Commissioners Office is worthy of a separate post on here. I called into their  Office the day after they were officially launched my Minister McDowell.

Like Loading...
In a reply to a question in the Dáil yesterday, from Finian McGrath T.D., Minister Shatter
replied  “I understand that the officers carrying out the examination are continuing to keep
the family members of the deceased updated on progress.”
The Minister is mistaken, this is not the case. We are NOT being kept up to date on progress
in the case.

THE High Court has granted a detective in the garda cold case unit – which investigates unresolved homicides – a temporary injunction restraining his proposed transfer to another section of the force.

Detective Sergeant Michael Buckley claims he is being moved from his role at Serious Crime Review Team at Harcourt Square Dublin to the Motor Vehicle Investigation Unit because of allegations of bullying and harassment he has made against a number of his superiors.

In proceedings against the Garda Commissioner, lawyers for DS Buckley told Mr Justice Paul Gilligan their client believes that his proposed transfer, which was due to take place next Monday, is an attempt to undermine him.

The Judge said he was satisfied to grant a temporary injunction, on an one side only represented basis, preventing the Commissioner from effecting the transfer. The Judge also made an order preventing anyone from being appointed to the position DS Buckley currently holds.

The court heard that in 2011 DS Buckley made a number of complaints, under internal Gardai procedures, about bullying and intimidation to Gardai with responsibility for human resources matters. In 2012 he was informed his complaints had been dismissed.

He appealed that finding. However he was subsequently informed that his appeal was being struck out because it was made outside of the required time limits. DS Buckley disputed that assertion and brought judicial review proceedings in the High Court aimed at having his appeal determined.

Earlier this year those proceedings were resolved and his appeal is now due to be considered. However following that decision he was informed that he was to be transferred to improve operational efficiency in the unit that deals with stolen vehicles.

However, he claims the decision to transfer him is unfair, in breach of Garda procedures and is a further attempt to bully and harass him.

The Judge made the matter returnable before the court to a date next week. 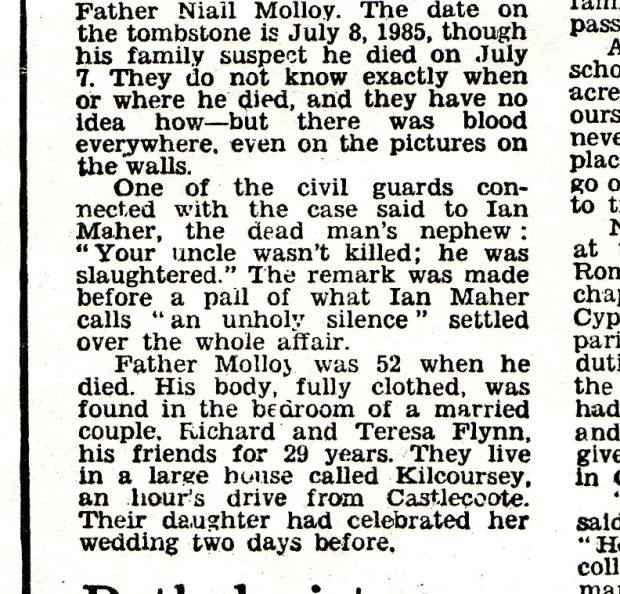