One year ago today The Garda Ombudsman published their report.

As is usual with our justice system there has been no reaction to it. The Garda Commissioner has not made any public statement as to it’s findings. Charlie Flanagan has dismissed us in the same fashion as Frances Fitzgerad did.

It is really not good enough.

A follower on Twitter @smackovsky brought this to my attention today.

Commissioner, Garda Siochána, to the Minister for Justice. 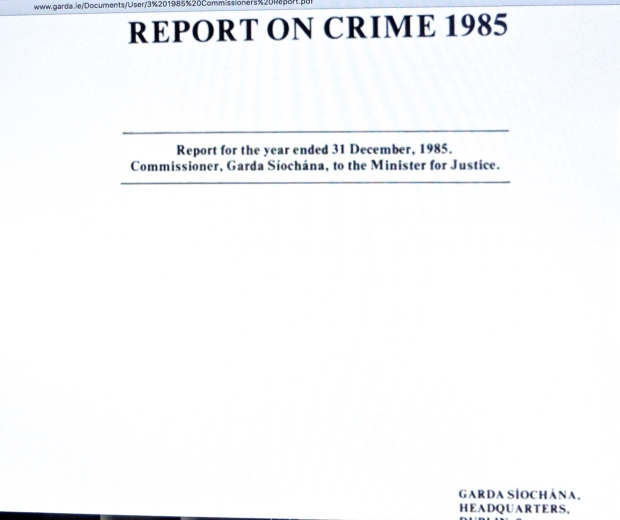 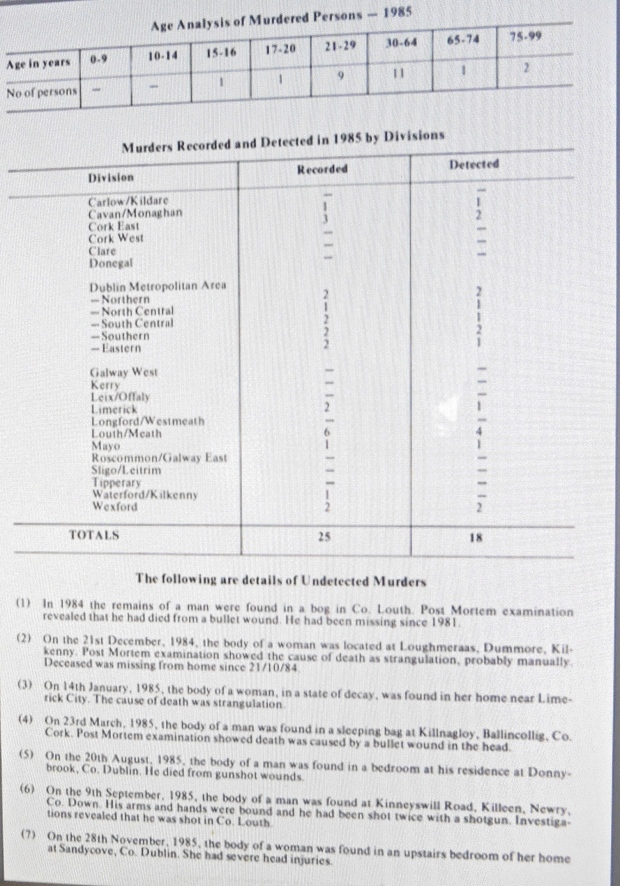 I still have not had the courtesy of a reply to my email sent to you last Monday. Could you please explain  your statement last week where you hoped the McGinn Report would bring “Some comfort to the family”
My family were distressed by your comments which were widely reported in the media.
We were told that your appointment would mean changes in the Gardai. Mr. Callinan also failed to answer letters. It is simply not good enough. You as Garda Commissioner  made the statement either justify it or make a public apology to the Molloy family.
My family have had enough to deal with over the past 30 years. We do not need this.

Garda Commissioner Noirin O’Sullivan said she hoped the report would bring some comfort to Fr Molloy’s family and it had also vindicated some of the work of the garda review team.

But she felt that, 30 years on, it was unlikely that inquiries would shed any new light.

“Some comfort to Fr Molloy’s family” . honestly what is this woman talking about ?

“Vindicated some of the work of the Garda review team”

What exactly does she mean by this statement ????

On the McGinn report, she said she was also very conscious there was a bereaved family at the centre of the case.

She said she hoped the report would bring some comfort to the family.

It appeared the work of the serious crime review team had been vindicated but she said she took no comfort from that.

She said if anyone had any new information on the death of Fr Molloy they could come forward with it, but she said she did not think it was right to hold out hope, 30 years later that new evidence was likely to establish anything new.

Can anyone explain her statement to me . New evidence is EVIDENCE

Towards the end of 2013 Minister for Justice Alan Shatter announced his intention to appoint a SC to examine the Garda Cold Case Unit report. To date no actual appointment has been announced.

Why are we being kept waiting ?

The Garda Commissioner Martin Callinan has still not answered the simple question put to him in January of last year.

Did the Gardai do a deal with “The General” Martin Cahill for the return of the Niall Molloy  file which had been stolen from the DPP’s Office.

Numerous letters have been exchanged between myself, my cousin and the Commissioner’s office but we still have not been given a reply. Mr Callinan has referred us back recently to the Cold Case Unit who say they know nothing about it and it is a matter for the Commissioner to comment on.

Veronica Guerin wrote about “The Deal” and more recently Paul Williams has mentioned it in a book ,on radio and in a newspaper article

Inquiry sought into circumstances of priest’s death in Clara

The family of priest Fr Niall Molloy is focusing on garnering support for an independent inquiry into the circumstances surrounding his death after news that a review of the case by the Director of Public Proseuctions in recent months will not result in prosecutions.
Fifty-two-year-old Roscommon priest Fr Molloy died after a society wedding in the Clara house of Richard Flynn in 1985, but nobody has ever been convicted in relation to his death. Speaking this week Fr Molloy’s nephew Bill Maher said he’s happy there are now no obstructions to setting up an inquiry.
Mr Maher told the Westmeath Independent this week that he “wasn’t surprised” a review of the case by the DPP led to a decision no prosecutions would result. Mr Maher and his cousin Henry McCourt were told the news at a meeting in Dublin with Detective Chief Superintendent Padraig Kennedy and Detective Superintendent Christy Mangan last Tuesday week. He did admit to being disheartened however.
“It’s been frustrating that the garda inquiries have taken so long to come up with nothing,” he said. “One would have thought if there was nothing there they could have concluded it in a lot less time.”
Mr Maher has always been in favour of an independent inquiry into his uncle’s death. Welcoming news last June that a file on the matter had been sent to the DPP, he said he still wanted a full inquiry into what happened in 1985 and the DPP review didn’t change his quest for that.
“I’m happy there’s no more obstructions to the setting up of an inquiry,” Mr Maher said. “Up to now people were saying ‘It’s with the gardai’ or ‘It’s with the DPP so we can’t comment’.” Now Mr Maher said the family are pushing for support – particularly political support – to set up an independent inquiry. “Already we have quite a lot of cross party support for an inquiry,” he said. “We want to find out the truth about what happened.”
Last November Senators John Kelly and John Whelan called for the establishment of an inquiry into Fr Molloy’s death. The senators said at the time that while the case was distressing enough, the fact that nobody has ever been convicted in connection with Fr Molloy’s death continues to cause distress and public disquiet. The two senators arranged a meeting on the matter in Leinster House in early March, which was attended by upwards of 70 public representatives. Senator Kelly also put pressure on Justice Minister Alan Shatter to set up a public inquiry last April, calling the case the biggest cover-up in the history of the State while speaking in the Seanad.
Mr Maher is also now pushing for a public statement from the Garda Commissioner regarding a file belonging to the case. Crime reporter Paul Williams claimed in his book ‘Badfellas’ that Dublin criminal John Traynor returned a stolen garda file on the case in return for charges being dropped against him.
“Now that there’s no investigation I would like him to make a statement on it,” Mr Maher said. “If it didn’t happen let him deny it. I’d like the Garda Commissioner to publicly state whether it happened or not.”

I wrote a letter to Commissioner Martin Callinan in 2012. Still waiting for an answer regarding  whether a deal was done with “The General ”  for the return of a stolen DPP file.

My question only requires a simple YES or NO 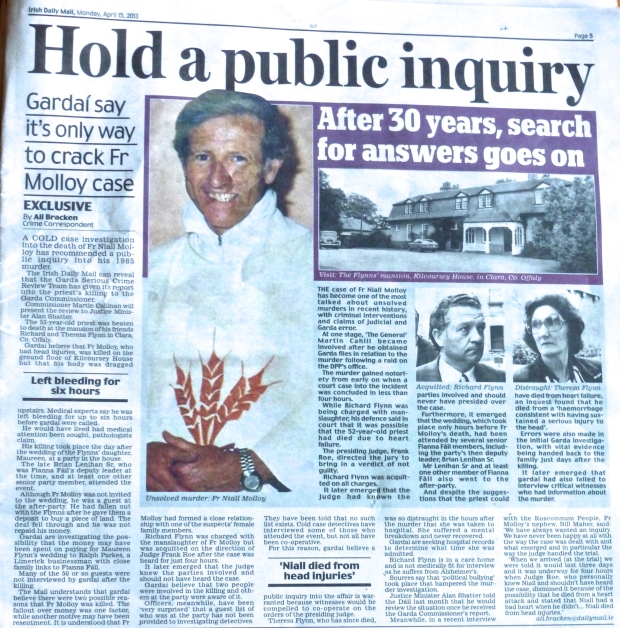 A MEMBER of the Oireachtas Justice Committee stormed out of a meeting after he was refused permission to raise the current garda cold-case investigation into the killing of Fr Niall Molloy.

However, when independent TD Finian McGrath attempted to raise the issue of the Fr Molloy investigation, he was ruled out of order by committee chairman David Stanton.

The committee then went into closed session and the gardai, media and onlookers were asked to leave.

Shortly afterwards, Mr McGrath left the meeting and the committee resumed its questioning.

Fr Molloy (52) was murdered at the home of his friends Richard and Therese Flynn in Co Offaly in July 1985 after requesting the return of a large sum of money owed to him.

The murder took place after a wedding party attended by several politicians. The priest was beaten up and his battered body placed in the bedroom of the Clara mansion.