One year ago today The Garda Ombudsman published their report.

As is usual with our justice system there has been no reaction to it. The Garda Commissioner has not made any public statement as to it’s findings. Charlie Flanagan has dismissed us in the same fashion as Frances Fitzgerad did.

It is really not good enough.

In true form for Ministers of Justice we are waiting for a reply to our letter from Charlie Flanagan T. D. After our meeting with his predecessor Frances Fitzgerald she would not reply and we had to contact the ombudsman. 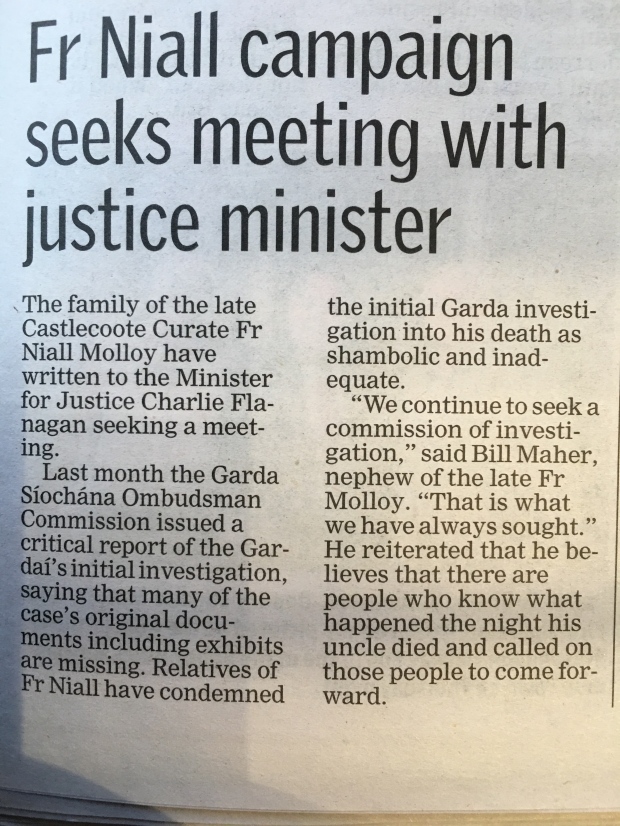 Fine Gael’s chairman has called on the DPP to treat the Fr Niall Molloy murder case as an “immediate priority”.

Charlie Flanagan TD issued the appeal after it emerged a garda file on the 1985 killing had been sent to the state prosecutor. Mr Flanagan said that answers were “long overdue in a case that strikes at the heart of the criminal justice system”.

Fr Molloy (52) died from head injuries after a brutal beating in the Offaly mansion of his friends, Richard and Therese Flynn. The murder took place shortly after their daughter’s wedding, which was attended by several high-profile politicians. Allegations of a cover-up, flawed investigation and political interference have surrounded the case ever since.

The Minister for Justice has told the Dail that the government will not be taking any immediate action after a critical GSOC investigation into the death of a Roscommon priest almost 30 years ago.

A report this week claimed that vital evidence in the case of the Castlecoote native, who was killed at a house in Clara in Offaly in 1985, has gone missing.

The report claims that vital exhibits, as well as documents, have gone missing – despite the case still being an ‘active investigation’.

The matter was raised in the Dail this afternoon by Roscommon TD Eugene Murphy, who demanded to know what the government was going to do about the report’s findings: