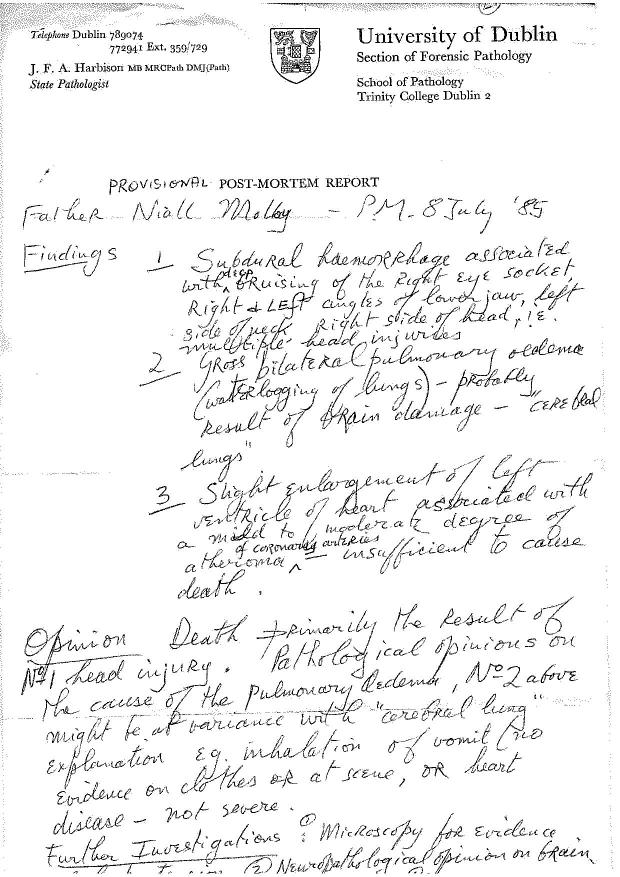 Page 9. Garda Arrival at the Scene.

Fr. Deignan stated that Niall Molloy had fallen against a wall and had hit his head.

in which it could be kept quiet.”

“Sergeant Forde was of the view that Richard Flynn appeared calm, cool and

unconcerned. He had a cup of coffee in one hand and his other arm was stretched

along the couch on which he was sitting.”

“There is no information about what, if anything, Teresa Flynn said to the medical

Dr. Harbison “saw blood staining on the thick carpet on the floor which he estimated

to be over a distance of eight to nine feet. The staining nearest the body was dark

and appeared to have been due to direct bleeding on the surface, but the remainder

“Dr. Harbison spoke to Inspector Monaghan who provided him with further

information about events in the house the previous night and to Dr. O’ Sullivan.

Dr. Harbison noted “six different areas of injury to the head and three areas of

injury to the legs. The nasal cartilage was slightly more mobile than normal.

There was internal bleeding in the head.”

Dr. Harbison stated “the distribution of these injuries were consistent with Fr. Molloy

having been the recipient of five, six or more blows from an object such as a fist.

Dr. Harbison also noted that there was no injury of a defensive or offensive nature

Page 16 Examination of the Scene.

“It seems that there was some attempt at looking at the pattern of the blood spatters,

some of which blood appeared to be diluted or watery, but there were no detailed

“This aspect of the investigation is particularly frustrating because, subsequently,

might have assisted in confirming or dismissing some of the suggested theories.

However, at this remove, all that can be said is that there was no meaningful

interpretation performed at the time and that, therefore, there is no evidence from

which firm conclusions could now safely be drawn.”

Pages 16 & 17 Examination of the Scene continued.

“There is no record to show whether any of these items was analysed at all.”

Fr. James Deignan “recalled that he had been contacted at about 1am by Richard

Dr. O’ Sullivan found the body to be “quite warm” and concluded that Fr. Molloy

“appeared to be only dead a short time” on his arrival. “Dr. O’Sullivan confirmed that

“Some documentation relating to this transaction has subsequently been

recovered by the Gardai and this is addressed later in this Report. However,

there is no statement from Mr. PP at all.” Appendix 4.

capacity as administrator of his uncle’s estate, formally requested the Garda

Commissioner to re-open the investigation into Fr. Molloy’s death. Part of the

basis for this request was new medical evidence which had emerged. QQ enclosed

with his letter Reports from Professor Dermot Hourihane and Dr. John Dinn.”

“In a Report dated the 20th of October 1987, Professor Hourihane, a Professor of

James’s Hospital in Dublin, ventured an opinion that the anatomical evidence of

injury was very strongly suggestive that Fr. Molloy had received kicks as well as

were first received. He based these opinions on a review of the transcripts of the

medical evidence from the inquest, in addition to Dr. John Harbison’s autopsy report

Senior Lecturer in Neuropathology at Trinity College, was also provided with the

transcript of Dr. Harbison’s evidence at the inquest along with the depositions of Dr.

Harbison and Dr. Gilsenan, the Coroner’s Report, the opinion of Professor Hourihane,

the histology slides, and two books of Garda photographs. In his Report dated the

16th of September 1988, he detailed the pathological findings in respect of Fr.

Molloy’s brain and agreed with Dr. Harbison’s conclusions in respect of the cause

of death. He went further in setting out the quantity of bleeding within the skull

and opined that this accumulation of blood would not occur with one hour, as

was implied in the statements of evidence. Dr. Dinn asserted that there was

histological changes which take from one to three hours to develop. In conclusion,

Dr. Dinn contended that Fr. Molloy did not die suddenly following the head

injuries had been inflicted.”

“Dr. Harbison did concede that he was unable to rebut Dr. Dinn’s assertion that

the changes in the neurones which were seen under microscopic examination

“On being asked about a number of specific issues, David Flynn denied any

knowledge about Fr. Molloy’s watch, about the broken glass table, about any safe

in the house, about any life insurance policy Fr. Molloy may have had, or about the

break in at Fr. Molloy’s home.”

Mangan on a voluntary basis in order to clarify some outstanding matters. Mr. Flynn

explained that, despite saying in April 2011 that he had no knowledge about the

broken coffee table he could now offer some assistance; he said that his sister LL

it by a BBB, who had been about 20 years old at the time. However, it seems that

BBB never made a statement.”

“On the 1st of June 2011, Professor Dermot Hourihane, who had been assisting the

Molloy family with expert advice on histopathology, sent to the family solicitor a

report from Dr. Francesca Brett, a Consultant Neuropathologist at Beaumont

based on her perusal of stained slides, she concluded that the red dead neurones in

and 12 hours. Dr. Brett also concluded that an area of ischaemic damage in the

“It appears that, as part of the SCRT investigation, a report was also

commissioned from Dr. Michael Farrell, also a Consultant Neuropathologist at

Beaumont Hospital. It was Dr. Farrell to whom the State Pathologist, Dr. John

Harbison, had deferred when he was invited in 1989 to comment on the time of

“Dr. Farrell examined the photographs which had been taken of Fr. Molloy’s

cranium, in a report dated the 16th of August 2012, stated that, although the skull

appeared to be intact, there were several different areas which showed evidence of

following the injury for a number of hours prior to his death. He concluded there are

“One of the matters which Thomas Monaghan recalled was that, at the time of

the 1985 investigation, an explanation had been given for the broken coffee table

which had been discovered in a downstairs room at Kilcoursey House; that two

children who were at the wedding had accidentally damaged it. Although Mr.

Monaghan remembered that statements had been taken from these two children,

any such statements appear no longer to be in existence. This appears to

guest at the wedding called BBB who, he thought, was about 20 years old at the

“The SCRT made enquiries with the army authorities, because of Fr. Molloy’s

former position as Chaplain, and because it had been suggested in the article that

the army, having received the will from Fr. Molloy, had sent it to the offices of the

Bishop of Elphin. These enquires revealed that no military records existed to

show that the army had ever had sight or possession of a will belonging to Fr.

Molloy or that any such document was sent on elsewhere. Further, when asked

about this in February 2013, the Diocesan Secretary in Sligo confirmed that the

office of the Diocese of Elphin had no will belonging to the late Fr. Molloy and

that there was no record that such a will had ever been deposited there.”

House is a feature of the case which many would find inexplicable.”

Flynns and Fr. Molloy were not revealed to the authorities at the outset of the

Garda investigation and only came to light subsequently.”

“It is an uncomfortable fact that the Judge at Richard Flynn’s trial, Judge Frank

Roe, was deeply involved in the horse business, which was something he had in

common with Richard and Theresa Flynn and with Fr. Niall Molloy.”

“Questions have been raised about the existence of a Will drawn up by Fr. Molloy.

Although suggestions were made that a Will had been entrusted to the Church, the

available evidence shows that, in fact, there is no record whatsoever of any such

Page 100 Shortcomings in the 1985 Investigation.

“It was the opinion of the SCRT:

1. that there ought to have been a comprehensive canvassing of the guests who

2. that house to house enquiries should have been conducted;

3. that the break in at Fr. Molloy’s home should have been properly

4. that the people mentioned by David Flynn in his original statement should

5. that Fr. Molloy’s wrist watch should not have been returned to the Molloy

family without a proper investigation of its condition”

“The SCRT report also expressed concern about the fact that Dr. John Harbison

Gardai at the time did not seek a Report from that colleague. It was established

that Dr. Harbison had been in contact with Dr. Michael Farrell, who when asked by

the SCRT, compiled a Report suggesting that Fr. Molloy had lived for 3 to 6

hours after sustaining the injuries. Had this opinion being sought in 1985, a

objective reading of the documents in the case. It would have been of benefit for:

1. Fr. James Deignan to have been more closely questioned about why he felt

rather than to summon a Doctor or the Gardai to Kilcoursey House.

2. The absence of any statement from the Solicitor, PP, about the business

transactions between Fr. Molloy and the Flynn’s is a significant omission, as

3. Further, notwithstanding that blood samples were taken from the scene

and from members of the Flynn family,

4. That various physical items were taken from the principal bedroom and

from other rooms in the house,

5. That numerous fingerprints were located in the bedroom,

6. And that all of these samples and findings were transmitted to the State

had been in the bedroom and elsewhere, there is a complete absence of any

8. Page 21 of transcript of evidence of Dr. Michael Harbison.

9. Department of Defence letter re Will of Father Niall Molloy. 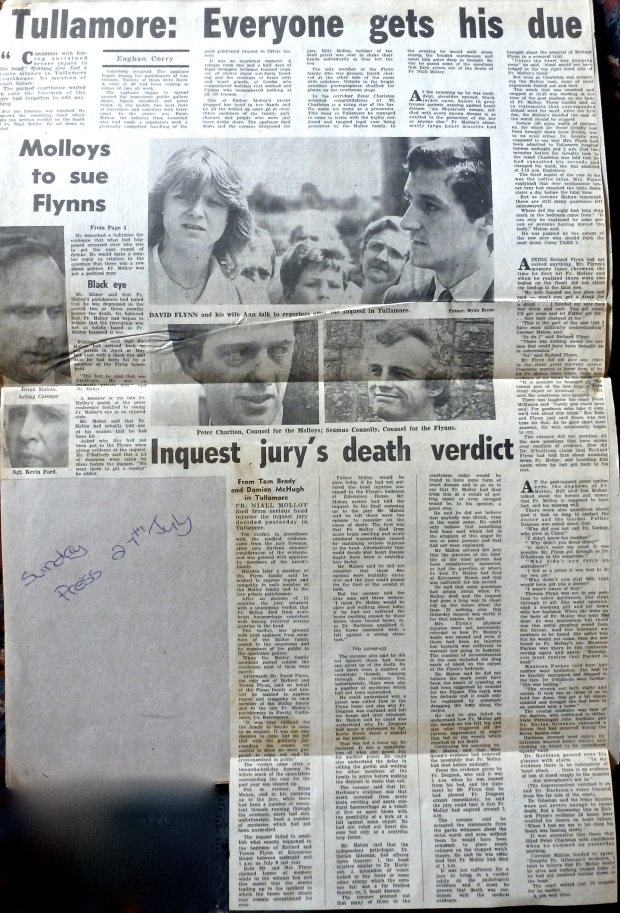 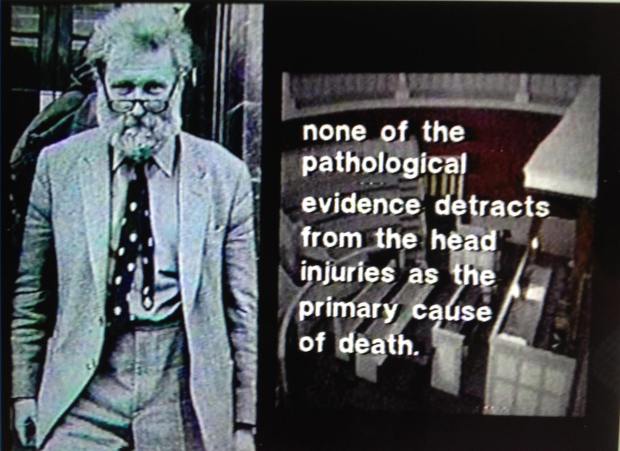 On page 7 of the Coroner’s Report which was presented as evidence.
Dr. Harbison wrote under the section
“Examination of the Brain ”
” On 30th July 1985 I examined the brain with Dr. Michael O’Halloran Consultant Neuropathologist at St. Laurences Hospital”

Dr. Harbison initialled the page before it was submitted as evidence.

NO SUCH NEUROPATHOLOGIST EVER EXISTED IN THIS COUNTRY.