i feel I must write to you. I happened to be at the wedding in Co. Offaly as a waiter on the day tout brother died. There was a row early in the evening where Fr Niall and Mr Flynn were fighting downstairs. Mrs Flynn got between them to stop them. As Fr Niall was bleeding she took him upstairs to clean him up and Mr Flynn followed.While Mrs flynn was trying to clean him up the row started again. Mrs Flynn kicked and boxed Fr Niall in the room at about 9pm. Every one seemed to go away. Mr Flynn was drunk there was some heated row with both Mr Mrs Flynn at that time the casual staff were paid and told to go. Some bottles were broken in the first fight. Mrs Flynns daughter cleaned the mess up. Fr Niall was  alive at 9:30 but was bleeding a lot. Don’t forget that the Judge in charge is a friend of Mrs, Mr Flynn and he has horses in trying with Liam XXXXX at the Curragh.  wish I could help further but that is all  know.Father was a nice man i only met him at the wedding.

He was murdered in cold blood 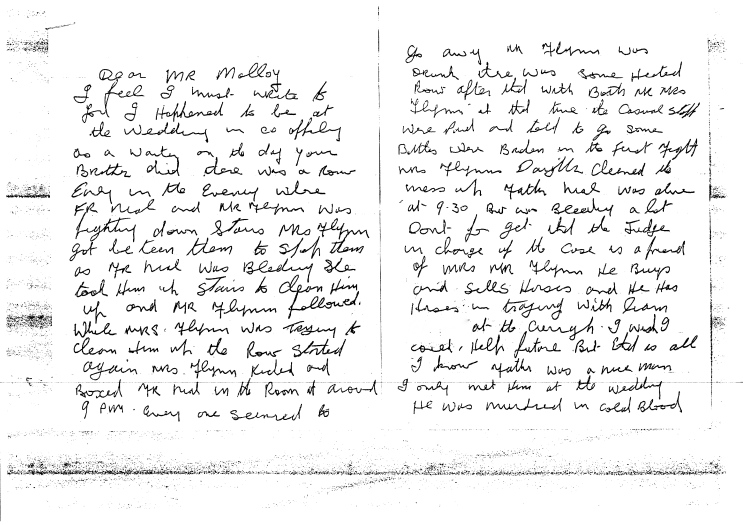 In a statement to the Gardai  Dr O’Sullivan said that Richard Flynn had told him ” There had been a argument downstairs, Fr Molloy came into the bedroom, I assume to thrash matters out ”

In his statement Niall’s brother Billy told of his visit to Kilcoursey hours after Niall’s death. In it he says that Richard Flynn told him “I had a terrible lot of drink taken and a political row started”

In cross examination in Court Richard Flynn denied that he told Billy Molloy that the row had been about politics.” We did not discuss politics” He said.

Four accounts relating to the death of Fr. Nialll Molloy were given at the Inquest. None of them matched wrote Donal Byrne in The Sunday Tribune 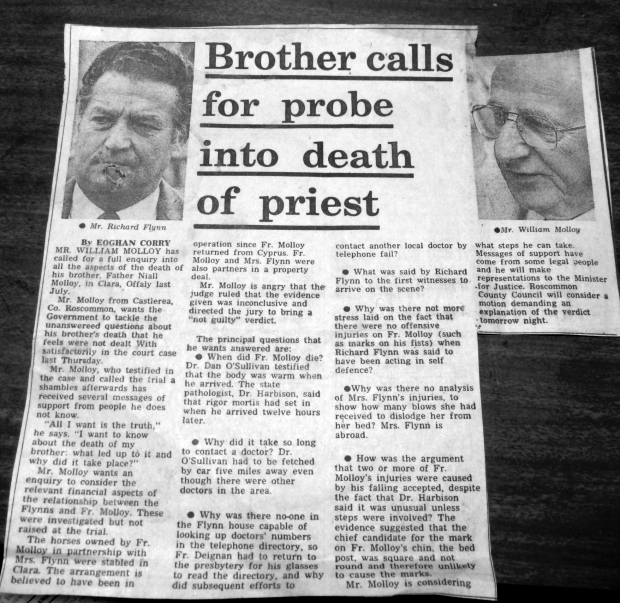 In an interview shown on RTE ( Irish National Television ) the late Billy Molloy said that when he visited Kilcoursey House within hours of Niall’s death he asked “What happened Father Niall” The reply, he states on Television, that he received was ” He stepped into the middle of a political row”

A BRAY man who tirelessly battled to solve the mysterious and violent death of a priest after a County Offaly society gathering in the mid-1980s, has passed away.

Ian Maher, who died at his Bray home over the Christmas period, played a prominent role in investigations into the circumstances of the death of his uncle, Fr Niall Molloy.

The question of how Fr Molloy died at the Kilcoursey House home of society couple Richard and Therese Flynn on the night of July 6, 1985, remains one of the great unsolved riddles of recent decades.

Mr Maher spent over a decade of his life acting on behalf of the Molloy family in the inquests that followed the mysterious death, and in the manslaughter trial of Richard Flynn.

Richard Flynn maintained that on the night, his wife Therese and Fr Molloy had launched a vicious attack on him, and that he had hit his wife, knocking her out, and struck Fr Molloy two or three times.

But at the various hearings, evidence was given of extensive injuries to various parts of Fr Molloy’s body, and of an eight-foot bloodstain on the carpet where the body had been dragged across the door.

In Richard Flynn’s only interview on the case, he stated that he had a clear conscience and had ‘never lost a moment’s sleep’.

Flynn’s trial for manslaughter was halted on the grounds of pathology evidence that the priest had a weak heart and may have struck a blunt instrument like a bedpost when falling.

Fr Molloy’s brother Billy died within 12 months of the trial, and the Bray man heeded his urgings to ‘continue the fight’.

The case closed however with Ian Maher professing that he had lost faith in the legal system.

He is survived by his wife Margaret and two sons, Colin and Niall.