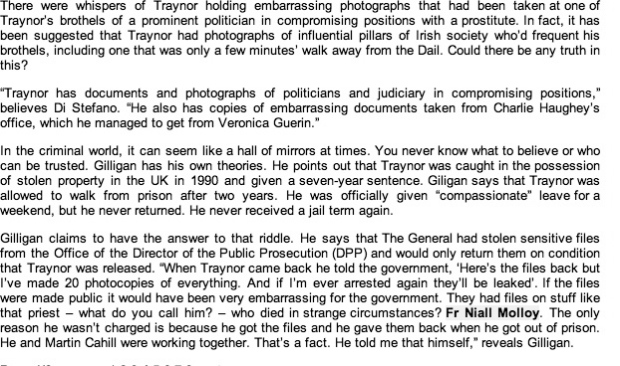 I am reading this new book CRIMEINK at the moment by Jason O’Toole.
In an interview with John Gilligan he claims that that John Traynor has managed to stay out of jail because he holds a copy of the stolen DPP file on my Uncle Niall’s death in 1985. John Traynor moves freely between Spain and Ireland without arrest. Veronica Guerin told me that she had access to the copy of the file was prepared to publish a series of articles ….against the advice of her Garda contacts and Traynor’s Solicitior.
In the book O’Toole says that “The General” had stolen sensitive files from the Office of the Public Prosecutions and would only return them on condition that John Traynor was released from jail in the UK. On Traynor’s return from the UK Traynor allegedly claimed that had a copy of the stolen files and would release them if he was arrested again.The only one of the DPP files that the authorities were anxious to get back was the one on the suspicious death of my uncle Fr. Niall Molloy. If the file had been made public it would have been very embarrassing for the Government ……….and that still seems to be the case 24 years later.
It’s a sad country when an innocent man can be kicked to death and the facts surrounding his death are covered up at a very high level despite all the publicity the case had at the time and since.
Whose name is being protected by the Irish Justice System ?
Online