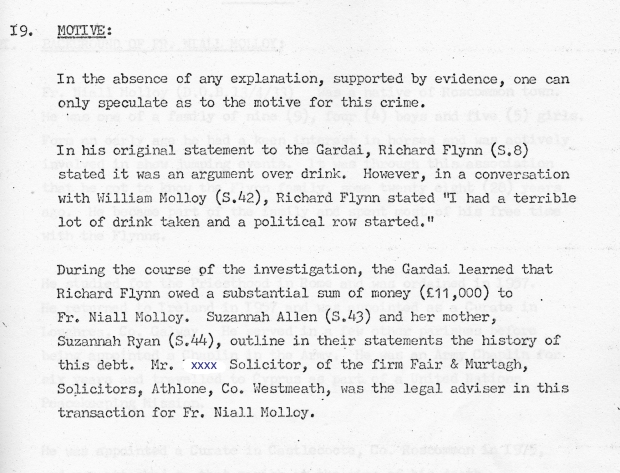 Dr Michael Farrell provided a report to Gardaí in recent years which outlines that Niall Molloy lived for between three and six hours after the initial assault. Dr Farrell was the Consultant Neuropathologist consulted by Professor John Harbison in 1985.

SCRT – The Serious Crime Review Team in there final report ( 2013 ) state that ” The members involved in this current examination of issues were required to rely on the typed investigation file that was submitted to the Office of the Director of Public Prosecutions. The original file, job books and exhibits have not been located to date”

http://www.inis.gov.ie/en/JELR/Pages/PR13000380  – No mention from Minister of documents missing from DPP’s Office.

Gardai neither sought or were given a list of the people present during the wedding celebrations.

Did they even request to see the Wedding Video or would that have been too much to expect from the Gardai  ?