A complaint on behalf of the family of the late Fr Niall Molloy was handed in to the Garda Ombudsman’s office today at 12:53 pm. The family complaint is based on the recent findings in the McGinn Report and was made by  Henry McCourt, Solicitor, a nephew of Fr Molloy.

Number of views to this Blog / Website has now exceeded 64,000

Over the past few months  a group calling itself  “Families for Justice” have made representations on behalf of the late Fr Niall Molloy in both Stormont and the European Parliament.

We would like to point out that the Molloy family has no connection at all with this group, were not informed of their visits at any stage and only heard about them through media reports.

The effect of fr. Niall’s death almost 30 years ago was not only to rob his family of a kind and gentle Pastor and friend but to place them under a dark cloud, which still hangs over us all to this day. Some family members fought with all their strength for justice to be done, lost their jobs and sometimes their health and their family in the process, and perhaps died before their time. There were sometimes temporary breaks in the cloud, when it looked like the truth might somehow be revealed, but which were only to be thwarted by further setbacks.

The greatest of the many injustices done to Fr. Molloy and his family, apart from the taking of his life, was the damage done to his good name by the calculated and vicious leaking of false innuendo to sully his reputation.

The family may have lost faith in the country’s institutions but they have never lost faith in the intrinsic goodness of the Irish people and their belief that one day someone would look to their concience, and once and for all reveal the truth.

To facilitate this, the members of Father Niall’s family call for a full public inquiry into ALL aspects of this matter, including the roles played by the institutions of the state in preventing the truth from being revealed. Only when this has been done will the family find closure and the cloud will be lifted. 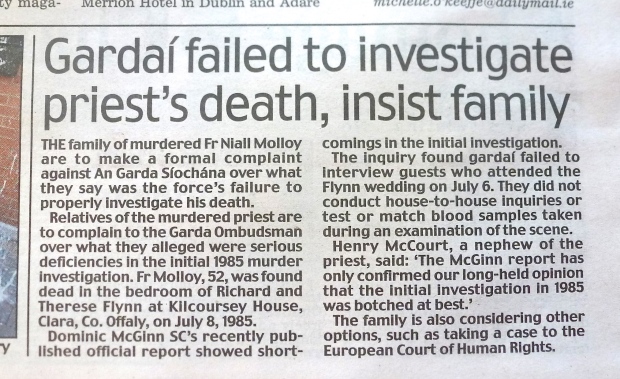