DÁIL QUESTION addressed to the Minister for Justice and Equality (Mr. Shatter)
by Deputy Charles Flanagan
for WRITTEN on Tuesday, 30th April, 2013.

* To ask the Minister for Justice and Equality if he has already received, or if not, if he will request as a matter of urgency the report of the formal review by the Garda Serious Crime Review team in to a murder enquiry (details supplied) in 1985 in County Offaly; and if he will make a statement on the matter.

– Charles Flanagan(Details Fr Niall Molloy death at Clara )
REPLY.I am advised by the Garda authorities that the examination surrounding the circumstances of the death of Father Niall Molloy is almost complete and that a report of this examination is expected to be submitted to the Commissioner sometime in May. Upon receipt of a report from the Commissioner I will review the situation.

I understand that the officers carrying out the examination are continuing to keep the family members of the deceased updated on progress. While I fully appreciate the concerns of the family, in any case where criminal behaviour is suspected it is only through a Garda investigation, and where evidence of criminal wrongdoing is available through the submission of a file by the Gardaí to the Director of Public Prosecutions, that persons can be brought fully to account.
Therefore, I hope that the Deputy will agree that, in the first instance, we need to allow the present Garda examination to proceed to its conclusion.

The Irish Mail on Sunday.
Cold Case Detective complains of break in to his locker and items removed. 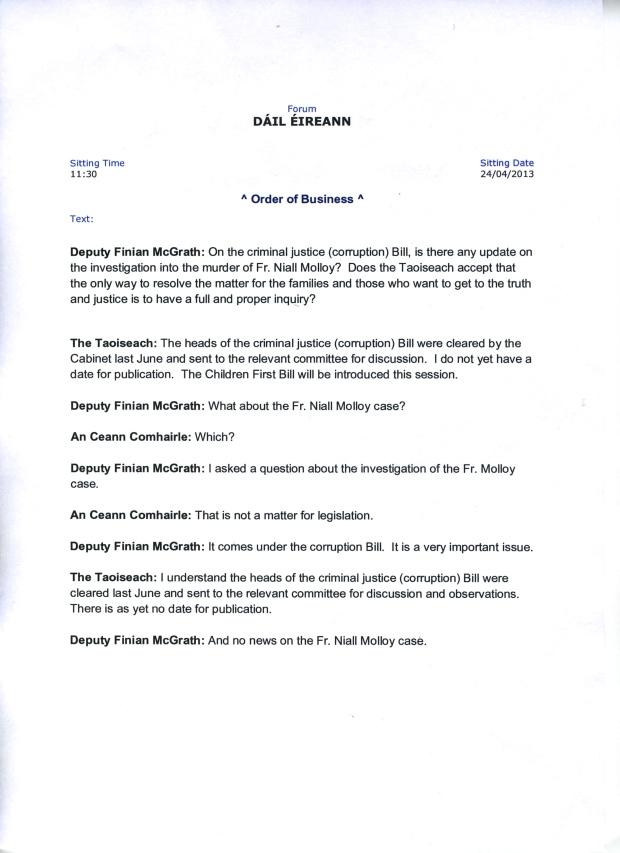 Petition has been signed by 859 people from around the world

I raised Fr Niall Molloy’s case with the Taoiseach today. Silence is deafening. What’s going on?

The Flynn family never contacted my family.  My cousin  Suzannah called the house the morning we heard the sad news only to be informed by one of the Flynns that there had been “an accident “

My sister telephoned Kilcoursey and the woman she spoke to said they would call her back, she didn’t get a call.

The only public statement was made by David Flynn when he was interviewed on the RTE evening News after the Inquest. This clip has been shown on RTE numerous times over the years.It has been shown on Today Tonight, Scannal, and Prime Time.

In the clip, an RTÉ reporter asked David Flynn if his family had found it very difficult to handle the rumours and speculation surrounding the case.

He replied: “Extremely difficult. It’s very difficult, maybe, when one knows certain answers and isn’t in a position to comment. It makes it very difficult to live with.”

(You can watch this Prime Time clip on the internet at http://tinyurl.com/bb8myux).

THE nephew of Fr Niall Molloy the priest who was murdered in Clara in 1985 has welcomed reports that the Garda Serious Crime Review team has recommended a public inquiry into his death.
A review of their investigations has been handed over to the Garda Commissioner Martin Callinan who will present it to Minister Alan Shatter.
‘I am absolutely delighted that the gardai are backing up our call for an independent inquiry. This is what we wanted all along,’ said Mr Bill Maher who believes that if a new investigation goes ahead and is ‘done properly’ it will reveal new evidence.
‘I believe justice will be done, this is quite strong the gardai are our national police force and there is obviously something they are not happy with’, he added.
It has also been reported that the Fianna Fail politician who was at the wedding of the daughter of Richard and Theresa Flynn was Brian Lenihan Sr who was the deputy leader of Fianna Fail at the time.
‘Brian Lenihan was a good friend of Theresa Flynn’ said Mr Maher. It is understood another Fianna Fail politician was present at the after party.
Fr Niall Molloy was murdered following the wedding of Maureen Flynn to Ralph Parkes. He had been invited to the after party and was beaten to death. He was left bleeding for six hours before help was sought.
Richard Flynn was charged with the manslaughter of Fr Molloy but was acquitted after just four hours by Judge Frank Roe. It later emerged that he was a close friend of Mr Flynn and should never have been allowed to preside over the case.
More controversy arose when it was discovered that vital witnesses had never been interviewed by gardai.
Justice Minister Alan Shatter called for a fresh inquiry when in opposition along with Minister for Communications Pat Rabbitte.

THE High Court has granted a detective in the garda cold case unit – which investigates unresolved homicides – a temporary injunction restraining his proposed transfer to another section of the force.

Detective Sergeant Michael Buckley claims he is being moved from his role at Serious Crime Review Team at Harcourt Square Dublin to the Motor Vehicle Investigation Unit because of allegations of bullying and harassment he has made against a number of his superiors.

In proceedings against the Garda Commissioner, lawyers for DS Buckley told Mr Justice Paul Gilligan their client believes that his proposed transfer, which was due to take place next Monday, is an attempt to undermine him.

The Judge said he was satisfied to grant a temporary injunction, on an one side only represented basis, preventing the Commissioner from effecting the transfer. The Judge also made an order preventing anyone from being appointed to the position DS Buckley currently holds.

The court heard that in 2011 DS Buckley made a number of complaints, under internal Gardai procedures, about bullying and intimidation to Gardai with responsibility for human resources matters. In 2012 he was informed his complaints had been dismissed.

He appealed that finding. However he was subsequently informed that his appeal was being struck out because it was made outside of the required time limits. DS Buckley disputed that assertion and brought judicial review proceedings in the High Court aimed at having his appeal determined.

Earlier this year those proceedings were resolved and his appeal is now due to be considered. However following that decision he was informed that he was to be transferred to improve operational efficiency in the unit that deals with stolen vehicles.

However, he claims the decision to transfer him is unfair, in breach of Garda procedures and is a further attempt to bully and harass him.

The Judge made the matter returnable before the court to a date next week.